Dindigul is one of the most important trading centers in Tamil Nadu and that is why it is important for the town to have proper transportation services that can link the town with the rest of the State and the country. In Dindigul, road transport as well as trains is the most important means of connection.

The Dindigul municipality Corporation control as total of 132 km of road network. Among the roads, only 21.66 km road is concrete road. Most of the roads, precisely 98.311 km is bituminous road and a few earthen roads and cut stone pavements can also be seen in Dindigul town. There are two national highways that pass through Dindigul. The NH 7 connects Dindigul to Madurai. NH 45A, which connects Chennai and Kanyakumari, also passes over Dindigul. Apart from the two national highways, two state highways, the Palani Road and the Bathalagundu Road also pass through Dindigul. As Dindigul is the district headquarters, a number of district roads also connects Dindigul town to other important parts of the Dindigul district.

Like many other parts of Tamil Nadu, Dindigul also boosts of a very good town bus service. This bus service is the main connecting source within the town and the suburbs. All the local transport needs are catered by the private minibus operators. More than 150 town buses are operated on a daily basis and these buses cover 128 different routes. The Kamarajar Bus Stand of Dindigul is an A-Grade Bus Stand in Dindigul and it covers an area of 5.37 acres (as of the calculations provided in the year 2007). The bus stand is located in the heart of the Dindigul town. The Tamil Nadu State Transport Corporation conducts another important bus services in Dindigul and the buses connects different cities with Dindigul. These bus services are very much preferred by the traders who come from different parts of Tamil Nadu to Dindigul for business purposes. Long distance buses to cities like Chennai, Tiruppur, Thoothukudi and Coimbatore are operated by the State Transport Corporation. Autos are also popular as a public transport in the town. One of the main features of transport in Dindigul is the truck services. Being an important business center, every day 400 to 500 trucks come to the city for loading and unloading activities. 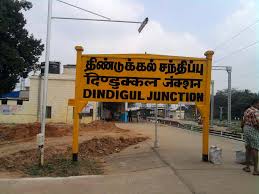 Dindigul railway station was established in the year 1875. At that time, the British administrators were establishing railway lines between Trichy to Tuticorin. Dindigul railway junction is located in the rail head from Chennai to Madurai and Karur to Madurai. There is a meter gauge rail line passing through Dindigul Junction to Palani. Passenger trains from Palani, Toruchirapalli and Madurai regularly come through Dindigul junction.

Madurai International Airport is the nearest airport from Dindigul town, which is around 70 km away. Though it is a relatively small airport, but the Madurai Airport is an international airport of India. In order to boost exports from Madurai and its surrounding districts, especially Dindigul and Erode, the Department of Revenue under the Union Ministry of Finance has issued a notification on 28 May 2013 which permits this airport to handle both National and International cargo. Airport Authority of India is planning to convert the old terminal of this Airport into a cargo complex.