Kodaikanal is famous for its scenic beauty. There are a number of natural attractions in the place. Also Kodaikanal is one of the most popular honeymoon destinations.

Among other tourist attractions in Kodaikanal, one must make a point to visit the Berijam Lake managed by the Forest Department. If you are lucky you can spot animals like bisons, deer and different kinds of snakes in the road leading to the lake. Another important attraction of Kodaikanal is the Bryant Park, the botanical garden of Kodaikanal the beauty of which is heightened by the Bodhi and Eucalyptus tree.The Kodaikanal Solar Observatory, The Pillar Rocksand Kurinji Andavar Murugan temple dedicated to Sri Kurinji Easwaran are other popular attractions of Kodaikanal.

Due to the huge number of tourists coming to Kodaikanal, there are a number of hotels in Kodaikanal that offer luxury and comfort to all the tourists. 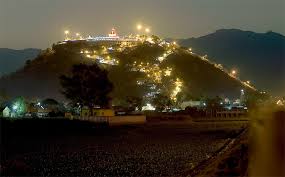 On the south of Palani Hills there is Cumbum Valley and in the north, the Kongunadu region.  The total area of the region is 2068 sq.km and the range is mostly in the Dindigul district. Kodaikanal, the famous hill station is situated in the Southern part of Palani Hills. The Government has decided to convert the zone into a protected area and it will be named as the Palani Hills Wildlife Sanctuary and National Park.  A number of peaks and waterfalls have made Palani Hills one of the favorite trekking destinations in South India. Natural beauty and a wide range of flora and fauna has made Palani Hills unique in the context of hill stations.

Ponmudi is a very popular hill station in Kerala, which has been favored by people of Dindigul as a holiday destination. “Ponmudi” means ‘the golden peak’ and it is a part of the Western Ghats mountain range. The place is blessed with scenic elegance and natural beauty. Ponmudi is covered with a thick carpet of tropical forests that starts from the very foot of the hill range. The twisted mountain trails in Ponmudi have been favorite of the trekkers coming in the region for a long time.

Tourists from Dindigul and all other places come to Trivandum and then take private transport from the city are come to Ponmudi. The narrow winding road leading to Ponmudi offers breath-taking scenic views. There are a number of tea gardens in the place and there are a total of 22 hairpin curves in the road leading to Ponmudi that gives the tourists a thrilling experience on the road. Blessed with pleasant weather throughout the World, Ponmudi is slowly becoming one of the most popular hill stations in India.

The mist laden Golden Valley is one of the biggest tourist attractions of Ponmudi. The area is covered with tropical vegetation and a number of wildlife varieties can be seen in the area. The Golden Valley offers a spectacular view of the surrounding hills. There is a deer park in Ponmudi, where there are wood and stone cottages for the tourists. The Ponmudi Falls and the Meenmutty Falls are two other important places in the area. Peppara Wildlife Sanctuary, located on the outskirts of Ponmudi, is a preserve spread across 53 km2 and is home to a variety of wild animals and birds like lion-tailed macaques,  sambar, leopards, Asian elephants, and Malabar grey hornbills. Agasthyarkoodam (1868 m), one of the highest peaks of the Western Ghats is in this region. 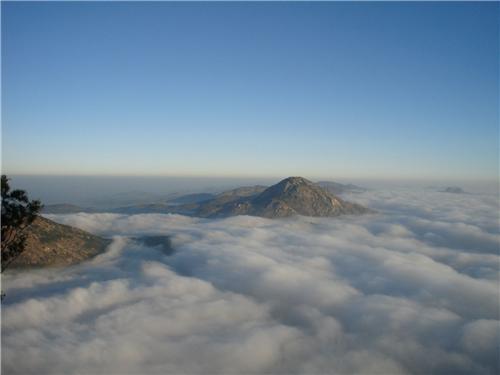 Nandi Hills, also known as Nandidurg is an ancient hill fortress in Chikkaballapur district of Karnataka state. It is slowly gaining prominence as a hill station and a historical place, as it is undergoing multi-crore renovation project undertaken by the Government via public-private partnerships.bThe peak tourist season is in the summer. Tipu’s Drop, Summer Palace and Fort, Horse Way, the Secret Escape Route  etc are very famous historical spots in Nandi Hills. Temples dedicated to Sri Bhoga Narasimha, Sri Ugra Narasimha, Gavi Veerbhadra Swamy temple and Sri Yoga Narasimha is some of the important temples of the area. Karnataka State Horticulture Department maintains a garden in the area which is very popular among the tourists, especially among the children.

The forest in Nandi Hills is a substrate for cloud condensation and every morning the trees of the area are covered in water. This is the main reason for many moist forest species of plants and animals seen in Nandi Hills. The hills are have a rich collection of birds and that is why it is a very popular location for birdwatchers and bird photographers. The evergreen forest patch on top of the hill is a popular wintering location for many migrant bird species like flycatchers,warblers and thrushes. Nilgiri Woodpigeon,a relict species of the area, can also be seen in the forest patch . A breeding pair of Shaheen Falcon is very popular at the Nandi Hills. The yellow-throated Bulbul can also been seen in the slopes of Nandi Hills.

Explore more about Tourism in Dindigul