Dindigul Fort which is locally known as Dindigul Malai Kottai, is a 17th century hill fort built by Madurai Nayak King Muthu Krishnappa Nayak in the year 1605. The history of Dindigul is centered around this fort. In the earlier times, the modern Dindigul region was the border of three prominent kingdoms of South India - the Pandyas, Cheras and the Cholas. It is said that the Chera king Dharmabalan had built the Abirami and Padmagirinathan temples. In The ancient Tamil text “Silappathikaram” the city is recorded as the northern most border of the Pandya Kingdom. Even the great historian Strabo had mentioned Dindigul in his works (20 AD).

The Chola King Karikal Chola had captured the Pandya Kingdom in the first century AD and at that time Dindigul came under the Chola rule. The Pallavas took over most of the provinces of South India (6th Century AD) and they became the rulers of Dindigul until 9th century AD. Cholas regained the control of the area again after the Pallavas. Until 13th century, the Cholas reigned there and after that the Pandyas took over. Malik Kafur, the leader of the Muslim invaders from the Delhi Sultanate raided South India in the 14th century. At that time, Dindugul was ruled by the kings of the Vijayanagar Empire while the Cheras were the other prominent rulers of South India. They fought with the Muslim invaders and Kampanna Udayar, the supreme commander of the Vijaya Nagar army played an important role in the war against the Muslim invaders. Another clan in South India, the Nayaks were gaining power slowly and their territory had borders with Dindigul. King Viswanatha Nayak of the Nayak Dynasty died in 1563 AD and he was succeeded by Muthukrishna Nayak who began the construction of the fort in the year 1602 AD. The construction of the fort was completed on 1605 AD. Muthukrishna Nayak also built a small fort at the bottom of the hill. Thirumalai Nayak, another important Nayak king was the person who brought the old glory of Dindigul. After the death of Thirumalai Nayak several unworthy successors had rule the area for some times, and then Rani Mangammal became the ruler of the region. She was an efficient ruler and still considered as a prominent figure in South Indian history. 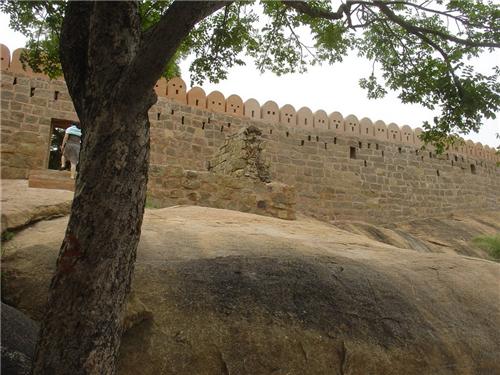 Maharaja of Mysore and Power Struggle

Chandra Sahib, a lieutenant of the Arcot’s Nawab took the power of Dindigul from the last king of the Nayaks, Vangaru Nayak with the help of the British forces in 1736, and in 1742, the Mysore Army, under the leadership of Venkatarayer conquered Dindigul. Venkatarayer ruled Dindigul as the legal representative of the Maharaja of Mysore. In the period, the area was divided into eighteen Palayams and every Palayam wanted to become independent. Hence none paid any taxes to Venkatarayer and chaos ensued. Though the Maharaja of Mysore made Venkatayer the Governor of the region, he failed miserably and he was replaced by Venkatappa in the year 1748. Venkatappa also failed to make any impression in the area and in the year 1755, the Maharaja of Mysore appointed Haider Ali to control the out of hand situation in Dindigul. Haidar was successful in this endeavor. Haidar grew in power and became the Maharaja of Mysore in the year 1777. Haidar appointed Purshana Mirsaheb as the Governor of Dindigul. One of the most important contributions of both Haidar Ali and Purshana Mirsaheb is the strengthen the fort at that time.

In the year 1783, the British Army, led by Captain Long invaded Dindigul and in 1784, the British Army and the Mysore Province came to an agreement. As per this agreement, the Maharaja of Mysore got back the control of Dindigul. Tipu Sultan, the son of Haidar Ali became the King of Dindigul. During the “Polygar Wars” between the Palayakarars, the Fort played an important role. Tipu Sultan also used the fort when the fought against the British. At that time, Tipu was aided by the French Army in the 1790s.

The Dindigul Fort is 900 ft tall and it is spread around 2.75 km. Before the British Army, in the 17th century the Maharaja of Mysore installed cannons and other gunfire artillery inside the fort. Even the fort had double walls so that it can withstand heavy artillery firing from outside. All the vantage points in the fort are armed with heavy canons. There was an arms and ammunition go-down in the fort. There are 48 rooms in the fort along with stables, meeting rooms, prisons, kitchen and a horse stable. The Dindigul Fort has its own rainwater reservoir which takes the advantage of the steep gradient of the area. 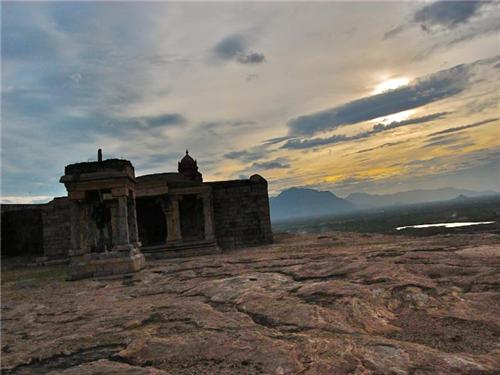 Archaeological Survey of India is in charge of maintaining the Fort and it has gained the status of a protected monument. Travelers from different places of India, as well as foreign tourists come to visit the fort. The ruins inside the fort wall, arms and ammunition depots, cannon points are some of the very popular tourist attractions of the fort. From the top of the fort, one can have a breath-taking view of Dindigul on the eastern side and wide farmlands on the other sides.

Explore more about History of Dindigul