Dindigul is a city in Tamil Nadu and it is also the administrative headquarters of the Dindigul district. The town of Dindigul is located in the Southwest of Chennai, the state capital. The distance between Dindigul and Chennai is 420 km or 260 mile. Dindigul is one of the ancient settlements of South India and it has been ruled by different dynasties like the early Pandyas , the Medieval Cholas, Pallavas, the later Pandyas, the Rulers of Madurai , the Dindigul Sultanates, the Rulers of Vijayanagara Empire, the  Nayaks of Madurai, Chanda Sahib, the Carnatic rulers and the British.

Dindigul district was separated from Madurai District in the year 1985. There are three revenue divisions in the district, along with eight taluks and 14 Panchayat Unions. Dimdigul is a land bound district, and it shares boundaries districts like Erode, Madurai, Trichy etc and with Kerala in the western part. The first collector of the district was Mr. M.Madhavan Nambiar. During the course of time, the district has been called in several names like, Dindigul Anna, Quaid-e-Milleth and Mannar Thirumalai. 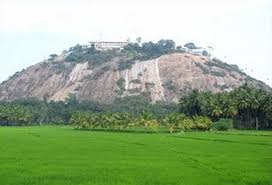 The topography of the town is plain and hilly and the weather varies with the change in climate. Like most parts of Tamil Nadu, summer is spanned from March to July and December and January are the winter season. The Southwest monsoon sets from June and lasts till August while in the period from October to December; the bulk rainfall takes place due to the influence of the North East monsoon.

As the town is the administrative headquarters of the Dindigul district, the town has registered a growth in the workforces associated with the secondary and tertiary sectors, while a marked decline has been registered in the primary sector. Most employment opportunities are seen in different industrial estates spread all over the town, hand looms, different types of trading and commerce activities and in administrative services. The current MLA of Dindigul constituency is K. Balabharathi from CPI (M) party and the current Member of Parliament is NSV Chitthan from Indian National Congress.

Two national highways, NH7 and NH45A pass through Dindigul along with two state highways, Palani Road and Bathalagundu Road. A number of district roads connect Dindigul with other different parts of the district. The Town Bus Services provide proper connectivity with Dindigul town and other parts of the district. Private minibus services are also available. Tamil Nadu State Transport Corporation conducts daily bus services from Dindigul to other parts of Tamil Nadu. Autos form an integral part of the transport system of Dindigul. Dindigul Railway junction is an important railway junction in South India.

Tourist and Religious Places in Dindigul

Kodaikanal, Palani Hills, Sirumalai, Dindigul Fort are some of the most important places of interest in Dindigul. Both the Dindigul district and the Dindigul town, the administrative head-quarters of the district had a glorious historical past. It was under the direct rule of Tipu Sultan. The Rock Fort of Dindigul, famous for its historical significance was constructed by King Muthukrishnappa Naicker of the Naik rulers.

Shopping and Eating in Dindigul

If in Dinidgul, you can shop for small artefacts and handicrafts to back home as souveirs. However, do not forget to taste Dinidgul biriyani which is famous not in the city but all over south India.

Dindigul district is famous for its handloom industry, flourished at Chinnalapatti. Art silk saris and sungudi saris are produced in the place and they are very popular all over India and well as outside India. Dindigul is famous for its iron locks and safes. Also the Dindigul town is very important wholesale market for onion and groundnut in South India. The district is very well connected with all other important places of Tamil Nadu, like Erode, Trichi, Coimbatore, Madurai and Chennai. Pattiveeranpatti, a prominent place in Dindigul is famous for cardamom and coffee curing enterprises. Apart from these, The Nilakkottai town is famous for brass vessel making industry and jewellery manufacturing. Also, this Taluk is famous for flowers and grapes. Oddanchatram is a famous vegetable market and Batlagundu is an important tomato market in Tamilnadu.